Who we are
392
page-template-default,page,page-id-392,stockholm-core-2.3.3,select-child-theme-ver-1.1,select-theme-ver-9.4,ajax_fade,page_not_loaded,vertical_menu_enabled,paspartu_enabled,side_area_uncovered,,qode_menu_,qode-wpml-enabled,wpb-js-composer js-comp-ver-6.9.0,vc_responsive 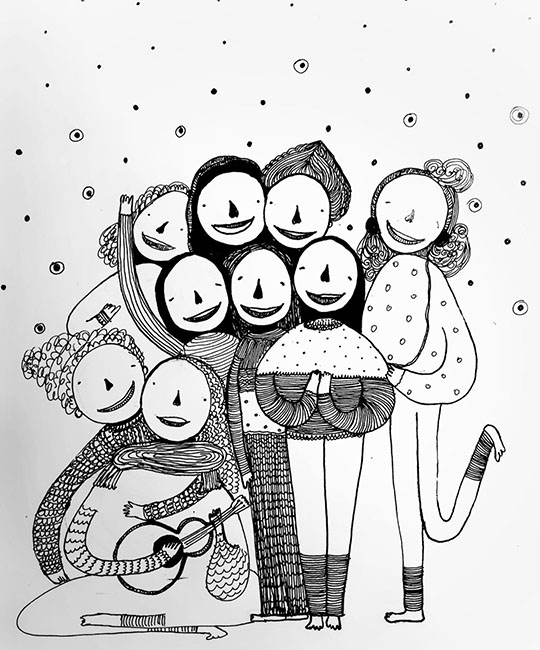 We are a group of girls and women from all around the world playing theatre together.

Our „mother-countries“ are as follows, alphabetically: Albania, Cameroon, China, Columbia, Georgia, Germany, Great Britain, Ingushetia, Kazakstan, Mexiko, the Philippines, Syria, and Togo. The members of the current group are between 10 and 58 years of age.

Twice a year, we present our work to an interested public. KARAWANSEREI has existed since autumn 2014. The project developd out of a volunteer project at the refugee camp in Schlaatz, Potsdam. It became evident that girls coming into puberty avoided coming to the mixed gender meetings in the afternoons. Instead, they stayed in their flats. Some of them were not attending school, and therefore there was hardly an opportunity to have contact with Germans or with german speaking people. The result was the new concept for social encounter! We wanted to create a protected situation where the german language is spoken and where the making of acquaintances results through interaction.

The name of our theatre project KARAWANSEREI stems from the old times of the camel caravans. A caravanserai was an inn, a safe place of accommodation where the merchants could spend the night and have contact with people from all horizons. Of course, back then, this was no place for women and girls. For us, however, it was important to offer this project exclusively to women and girls so that daughters of muslim families would be able to participate.

We found a space in a youth center called „freiland“ in Potsdam, where we’ve been weekly practicing since September 2014. The project is a cooperation between „Flüchtlingsarbeit im evangelischen Kirchenkreis Potsdam“ and the theatre pedagogue, Sabine Wiedemann, Potsdam (www.jakamos-theater.eu). Until now, the project has been getting financial support form the evangelical church Potsdam, MASGF Brandenburg and the Ministry of Science, Research and Culture Brandenburg.

What do we want and wish!

We want to get to know one another! We wish to form together a peaceful world!